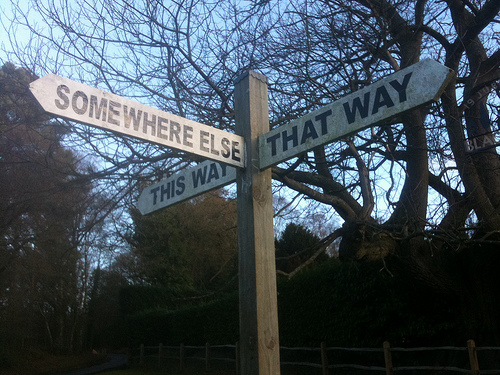 I’ve seen this question arise numerous times on forums, blogs, and nearly each time I talk with an early retiree in-person. It seems like such a first-world problem. But I understand. Sometimes we as humans are so focused on achieving a goal, we forget to plan our next one.

This sort of happened to me when I graduated college. About halfway through college, I decided to transfer schools and graduate early. That meant I spent most of my time attending class, meeting with professors, meeting with classmates (to study), or practically living in my dorm’s computer lab. I knew the routine of both the morning and the night custodians. I knew I would take a break at 9:15 pm so they could clean my desk as they moved down the rows.

Ever since I could remember, I had been a student. I was a good student as well. Then all of the sudden… that life vanished. No more school. It was a shock. I had a few strong job leads lined up but I hadn’t really planned my career. How odd. It wasn’t a great feeling. I think this is how most people feel after reaching early retirement.

“I’m financially set. Now what do I do?”

I’m reading a book right now by Napoleon Hill. He’s a master at the art of self-improvement. I STRONGLY recommend you read his work.

In the book, he says we must keep track of our time if we want to live life to the fullest. That makes sense. Whenever I forget to set myself a schedule, I end up doing very little with my day. Or, nearly as bad, I let one task take up my entire day. How silly.

Napoleon Hill says we need to keep the same focus whether we are focused on early retirement or any other task. Early retirement isn’t about lazily walking around the neighborhood or pretending your new dog is a baby, that requires your constant attention.

Few people who reach financial independence would enjoy such a lifestyle.

So sorry, but reaching FI doesn’t mean a permanent vacation. You’re better than that. You’ll want to do more. This post is about what to do once you reach your first goal: financial independence.

You’re FI. You’ve learned how to attract money. That skill doesn’t just go away. Once you ‘retire’, work will have a way of finding its way to you. It may be as simple as when talking with a neighbor. Or perhaps work will find you when talking with a friend who owns a website. It’s like the Law of Attraction. Something that powerful doesn’t just stop once you reach a 4% safe withdrawal rate.

Once you retire, work some more. But with this money, do whatever you want! Lose it all to a failed startup? Who cares! Your lifestyle will remain the same. Do you want to donate all profits to charity? Go for it! May as well give it to someone who needs the money.

Yes, upon ‘retiring’ you will likely continue working.

Cliche, isn’t it? But it’s true. You’re older. Compound interest isn’t keeping you from spending money like it was before. Work is no longer the cornerstone of how you spend your time. My advice is to take two different approaches. First, you could plan far in advance. Book early to save on flights and travel packages. Approach number two means being spontaneous! If a Carnival cruise ship crashes, that means you can get last-minute discounts before the price shoots up again. Want to take a weekend getaway? Use online tools that’ll get you last-minute reservations for little to nothing. Traveling when old can be just as fun (or more so) than traveling as a kid.

If you don’t really enjoy traveling too much, you can simply take a gap year. You can slow travel or just stay at home and relax for a year. Perhaps you could do some DIY remodeling. Perhaps you could finally buy that 1994 Toyota Supra Turbo you’ve been lusting after for decades. It could be your new project car.

This being said, you’ve done what many people can only dream of doing. Consider starting a blog or writing an eBook. It doesn’t have to be profitable. Just share your wealth of knowledge.

If you want to get into a hobby, go right ahead. You probably have the money to do so. However, beware – you’ll probably quickly turn it into a side hustle.

Reaching financial independence doesn’t have to mean much more than saying, “Huh. Guess it looks like I could retire now.” *returns to work*

Staying One Step Ahead…

When I was in college, I didn’t plan my future career very well. That was mistake. However, I now have my career figured out. I’m working towards financial independence. What will I do after? Exactly the same things – just with less stress. That’s my plan.

What will you do with your financial freedom?