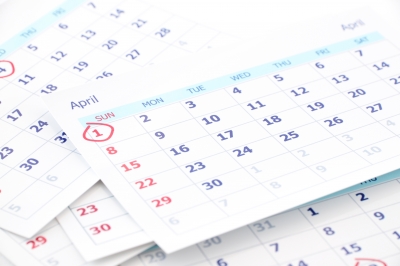 We’ve probably all regretted buying something too hastily, but the opposite can also happen — you pass up a sale, and then see the item for a much higher price later.

To save your wallet the dings of mistimed shopping trips, we studied trends and asked experts when the products you’ll be shopping for will go on sale throughout 2017.

If you’re in the market for a stove or dryer this year, holiday weekends will mean discounts. Mark your calendar for Memorial Day (May 29), Labor Day (Sept. 4) and Black Friday (Nov. 24).

Over Labor Day 2016, Best Buy, Lowe’s and H.H. Gregg all took up to 35% off select major appliances. During Memorial Day 2016, Sears marked vacuums and floor care down by 30% online and in store and offered discounts on major kitchen appliances.

There are other ways to save, too. When manufacturers release a new, top-end appliance, they often discount their old top-end, says Mark E. Bergen, chair in marketing at the University of Minnesota’s Carlson School of Management. You’ll just have to do without the latest features.

“As you’re purchasing, you want to think about what a good deal means,” Bergen says. For some, it’s trendiness. For others, discounts.

Department stores always seem to have clothing on sale, but deals improve at the end of each season. Retailers “want to charge the most to consumers who want to have it early,” says Rebecca Hamilton, a marketing professor at Georgetown’s McDonough School of Business.

Stores clear out inventory seasonally, so winter clothing goes on sale just before spring, spring clothing before summer and so forth. If you’re content without the latest trends, shop the clearance rack for end-of-season savings.

The day after Thanksgiving produces a wealth of deals on tablets, smartphones and gaming consoles. A NerdWallet analysis of 2016 Black Friday deals found that some products cost hundreds of dollars less on Black Friday than just weeks prior. If you’re gunning for a specific popular item, reserve your purchase until then.

Bear in mind that Apple keeps to its own sale timetable. The company hosts a keynote event each September, and discounts on previous models of its devices usually follow.

After the Sept. 2016 iPhone 7 unveiling, Best Buy offered $100 off the iPhone 6S or $200 off the iPhone 6S Plus with a two-year contract with Verizon Wireless or Sprint. Bergen recommends you begin monitoring prices of old models as soon as a new phone is announced.

With seasonal items, procrastination is key. The longer you wait to decorate, the better. And for the absolute best deal, wait until after the holiday to capitalize on excess inventory. It won’t do you much good for 2017 holidays, but you’ll be ready for 2018.

Target’s 2016 after-Easter closeout featured discounts of up to 70%. Similar deals happen after Christmas, Halloween and Fourth of July.

Like appliances, home goods go on sale during holidays. And the prices of some major purchases, such as furniture, are negotiable. Browse online, then buy in store. Try to knock some money off the price or ask the salesperson for free delivery.

Bergen says negotiating works especially well if the retailer thinks it might lose your business. “Don’t be afraid to go into a furniture store and say, ‘I’m going to go see a competitor; is there anything you can do to make it worthwhile?’” he says.

The best time to book a flight in the U.S. is on Tuesdays at 3 p.m. Eastern time, according to travel meta-search engine FareCompare. At this point each week, the site says, airlines have released their sales and competitors have matched prices. It recommends buying U.S. domestic tickets three months to 30 days before departure.

If you’re looking to go abroad, Rick Seaney, CEO and co-founder of FareCompare, says 2017 is the year to visit Europe. Terrorism jitters, Brexit and the strong dollar have dropped prices to seven- or eight-year lows, he says.

January is an ideal time to budget for the household spending a new year brings. As a general rule, purchase products off-season for the best shot at a discount. If you can’t plan a purchase, compare prices and look for coupons.

This article was written by NerdWallet and was originally published by USA Today.