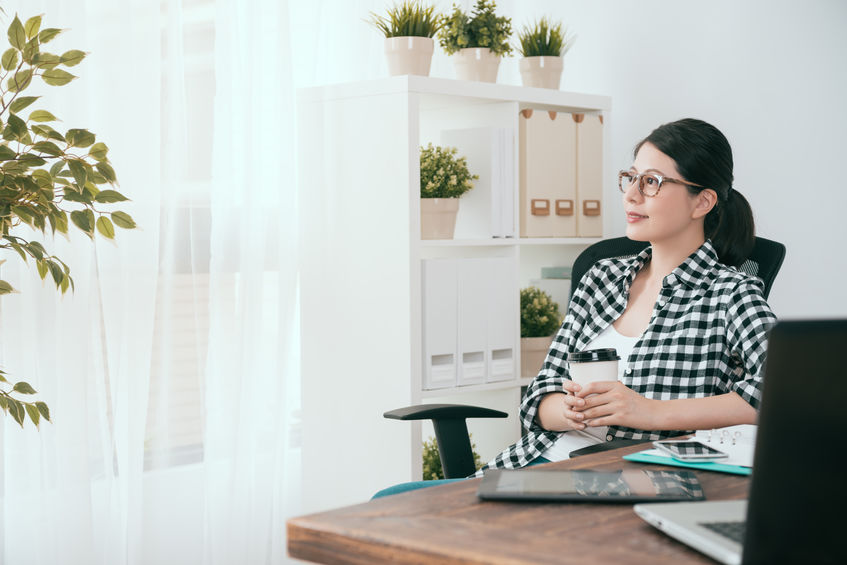 For about six months beginning in January, James Hulett’s garage became his home office. His company sent him home earlier than most workplaces in an effort to keep the coronavirus from spreading.

“I have a 3-year-old son who’s way into tools, so he would be [in the garage] finding tools to take them inside and take apart toys and stuff,” he says. “It was a circus.”

In the summer, he and his wife bought a home west of Salt Lake City that could accommodate an indoor workspace. All that was left was to turn it into an office.

Hulett, like employees at many companies in the U.S., expects to work from home at least through the end of the year. Some companies have announced plans to keep office doors closed well into 2021, and others have offered remote work as a permanent option for employees.

If you’re ready to start building your home office, here are tips for managing the costs, plus financing options for more extensive projects.

Consider your cash on hand

Hulett furnished his office using money he could spend within his weekly budget. His emergency fund is ironclad, he says, so dipping into it wasn’t an option.

Over a third (34%) of homeowners who have done home renovations since March 1 took the same approach, paying for their projects with cash they had on hand, according to a recent NerdWallet survey.

If you aren’t using savings designated for home improvement, it’s OK to use your emergency fund, says New York-based certified financial planner Jeff Wolniewicz. After all, he says, that fund is for unexpected expenses.

Just be mindful of how much you need in your emergency fund to feel secure and make a plan to replenish it right away.

“I think everybody has seen how important it is through COVID to maintain that,” he says. “An emergency fund is a huge peace-of-mind right now, so just have that plan to rebuild it.”

You can also put smaller home office purchases on a rewards credit card that gives cash back. Pay the full balance each month to keep interest charges from outweighing the rewards.

One spending strategy is to invest in pieces that will make your work time more productive and enjoyable and to spend less where it won’t make as much of a difference.

A key piece that can create an effective office environment is a comfortable, supportive office chair, says interior designer Kerrie Kelly, who is based in Sacramento, California.

She suggests finding one that’s similar to what you have at work.

You can also get your money’s worth out of a fresh coat of paint. She says a new color can help create the feeling you want when you’re working.

“If that light blue changes your mood, go for it, or if you think that crisp white is gonna keep you really organized, then go do that,” Kelly says.

Additionally, find a way to compartmentalize. Especially if your workspace doubles as a dining room, for example, invest in ways to hide your work — from yourself, if nobody else. She suggests something like a rolling storage cart.

For his home office, Hulett wanted a formal, work-like atmosphere — he still puts on a button-down and gets ready for work — and for him, that meant an executive desk and credenza.

“I wanted there to be some kind of stepping out of normal home life into a work situation,” he says.

Hulett says his office cost $3,500 to furnish, and almost everything in it is secondhand.

His biggest tip is to use websites like eBay and Facebook Marketplace, where people are reselling office furniture in bulk at low prices.

Hulett says his desk was about $100 on Facebook. A similar desk by the same designer is valued at $3,000 by a vintage furniture store. Hulett drove to Phoenix to buy the matching credenza he saw on Instagram for about $800.

“It’s like a weird secondary economic phenomenon of COVID,” Hulett says. “I don’t think it’s ever been easier to get equipment that’s on par with what people are used to using at work.”

Get financing for bigger upgrades

Homeowners hired professionals for about 63% of home improvement projects between 2017 and 2019, according to the NerdWallet report. And professional help doesn’t always come cheap. If you’re thinking about adding a room or a more extensive workspace renovation, you have a few financing options.

A credit card with a 0% interest promotion could help you pay for your office updates interest-free, Wolniewicz says. The no-interest period on these cards is usually 12 to 18 months, so keep the interest rate in mind in case you can’t pay it off during that period.

You usually need good or excellent credit to qualify, Wolniewicz says, and though he sees some issuers making more zero-interest offers than earlier in the pandemic, they may still be hard to come by.

For building a home office, Wolniewicz recommends a home equity line of credit because of its flexibility. You can take only what you need from a HELOC and leave the rest, unlike a home equity loan, which comes in a lump sum.

If you can’t get your hands on a zero-interest credit card and you don’t want to tap your equity, consider a home improvement loan. You usually get the funds from these loans faster than an equity loan, and they can have annual percentage rates lower than a credit card.

Because they have higher rates than HELOCs and typically shorter repayment periods, your monthly payments could be higher, Wolniewicz says, but you’ll also clear your debt faster.

Annie Millerbernd is a writer at NerdWallet. Email: amillerbernd@nerdwallet.com.

The article How to Build a Home Office Without Breaking the Bank originally appeared on NerdWallet.