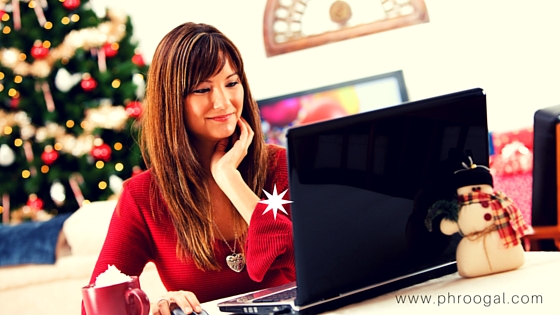 An American Research Group survey of 1,100 adults between November 17 and November 20, 2015 found that the average person plans to spend about $882 during the 2015 holiday shopping season, about two percent more than the 2014 survey.

Between Thanksgiving and Christmas, consumers give their credit cards and bank accounts a serious beating. Many people feel obligated to buy gifts for their loved ones, sometimes at the expensive of their personal finances. This doesn’t only apply to those celebrating the holidays. Some who don’t participate in Christmas celebrations may also spend more this time of year, especially if they take advantage of sales or schedule a year-end vacation.

Even if you don’t plan to spend a lot during the holiday season, your budget might go out the window if you let your guard down and give into the desire of your eyes. If you don’t keep a watch on how much you’re spending, you can get in over your head and ring in the new year with a bunch of new debt and post-holiday financial blues.

You can avoid this scenario by coming up with—and sticking with—a spending plan prior to heading out to retail stores. But life doesn’t always work according to plan. The good news is that there are ways to beat financial blues after the holiday season.

Once the party and holiday festivities are over and you settle back into your routine, it’s time to start paying off debt and get a handle on your money.

Don’t Beat Yourself Up

Receiving your credit card statement after the holiday season can trigger a serious case of buyer’s remorse. You might beat yourself up or call yourself every ugly name in the book. It can be hard to shake the guilt that accompanies a lack of self-control and overspending, but you can’t change the past, so giving yourself a hard time isn’t going to fix the problem or make the debt disappear any quicker.

If it makes you feel better, you’re not the first or the last person to end up in this situation. We’ve all been there, including myself. Some Black Friday deals on apparel and electronics are sometimes too good to pass up, and most of us have made the mistake of spending money we don’t have. The past is the past and the best thing you can do is acknowledge the mistakes you’ve made and come up with a plan to move forward.

Take Stock of Where You Are Financially

The money you need to pay off debt incurred over the holiday season isn’t going to fall out the sky. Getting from under this burden requires disposable income. Before you can move forward, you have to assess your finances and know where you stand.

If you have a cash reserve, maybe you can afford to take money from your savings account and pay off debt. On the other hand, if you’re living paycheck to paycheck, you’ll need to revamp your budget. Write down every monthly expense and compare these expenses with your take-home income. How much do you have left after paying housing, transportation, food, utilities, insurance etc?

Don’t leave surplus funds in your checking account after paying bills, or else you risk spending this money on unimportant things. Instead, make a credit card payment, even if your credit card bill isn’t due. It doesn’t matter if it’s only a $25 or $30 payment, extra payments knock your balance down faster and reduce how much you pay in interest.

Go On a Spending Diet

If you went overboard during the holiday season buying items for yourself and family, then you probably don’t need anything for the time being, making this a perfect time to go on a spending diet.

For this type of plan to work, you must commit to only buying the stuff you need and nothing more. This is by no means easy, especially if you’re used to going out every weekend or making little impulse purchases here and there. But if you can eliminate $20 of impulse spending a week, that’s $80 a month you can put toward getting rid of your holiday debt.

Where Else Can You Cut Back?

Don’t stop with a spending diet. Take inventory of any other luxuries you’re spending money on and see where you can cut back. For example, how much are you paying for cable? A massive cable package can keep you entertained for hours, but it doesn’t make sense to spend $200 a month for cable when you’re dealing with post-holiday debt. Downgrading or canceling your service provides extra cash that you can dump on your credit card debt and get rid of balances sooner.

You can also save money by brewing your own coffee at home and cutting out expensive coffee trips, or brown-bagging your lunch. Other ways to get out the red include at-home manicures/pedicures and hair treatments, or you can pause your gym membership and save $30 to $40 a month. Some gyms will let you pause memberships for up to 90 days.

Cutting out little expenses here and there may seem pointless, but the savings adds up. If you can put $200 back into your budget every month, you can pay off a $1,000 holiday debt in about five months.

Post-holiday financial blues can strike without warning and get your new year off to a bad start. The road ahead might be rough, especially if you don’t have a lot of extra cash, but don’t let it get you down. If you stay positive, create a debt elimination plan and don’t cheat on your spending diet, you’ll save more in a short span of time than you thought possible.

Once you pay off the debt, don’t revert to your old spending habits. Instead, deposit the money you were using to pay off debt into a savings account. If you can get a jump-start on next year’s season, you won’t have to use a credit card.

This article comes from our friends at Phroogal. It was originally posted on December 14, 2015 and can be found here.